Ginger Beer is not synonymous with Ginger Ale.  While both products use very similar ingredients, there is a flavor distinction.  Ginger Beer is a lot more potent on the ginger side.  It is a strong, robust flavor, unlike the softer ginger taste in the Ginger Ale soft drink. 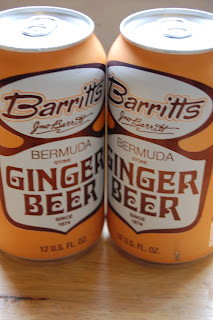 Because of this bite, traditionally, Ginger Beer has been used as a mixer in certain cocktails.  Most popular being the Dark 'n Stormy - ginger beer, dark rum, and a lime.   Also popular is the Moscow Mule - ginger beer and vodka. These days you see Ginger Beer being more vastly used in mixology and popping up on drink menus nationwide.  I can only hope this new fad continues for a long time. 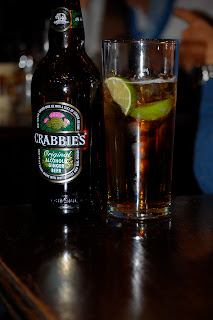 There are a few different kinds of Ginger Beers branded in the market.  My favorite, and the most traditional Bermudian brand, is Barritt's.  Whenever we can find Barritt's Ginger Beer, we buy up a 12-pack to stock in the fridge for the summer's Dark 'n Stormys.

Alternatively, there is Gosling's Ginger Beer, which is found more commonly, as it is manufactured by the folks that bring us the ever so delicious Goslings Dark Rum.  A third brand that has gained popularity is Fever Tree.  With the clear glass bottle packaging, I consider Fever Tree more of a high end or hipster kind of Ginger Beer, but delicious all the same.

Typically the Ginger Beer you find these days is non-alcoholic, but on a recent trip abroad, we stumbled across an alcoholic version: Crabbie's Ginger Beer.  Back when Ginger Beer was first brewed, it was much like beer, alcoholic in its natural state.  Thus, if I had better known my history, or ginger beer brewing techniques, I shouldn't have been surprised to stumble across this wonder, but I was, excitedly.

Whether you find yourself imbibing in already spiked Ginger Beer, or mixing up your own cocktail with the non-alcoholic version, I raise my glass to you, and a tastefully refreshing summer.