When you go to Hollywood, you get a map of the home of the stars and tour around Beverly Hills at the lifestyles of the rich and famous.  Well, when tourists come to Georgetown, DC, they are also map in hand, but instead of seeking the home of multiple celebrities, they have the multiple homes of one particularly star couple:  John and Jackie Kennedy.

The Kennedys lived 9 different homes over their 15-year span in Georgetown, with each home befitting the time period of their busy and high-profile lives.  Here is the self-guided tour.  And if you really want to do it right, stop by for brunch or a brew at one of the Kennedy's favorite old stomping grounds.

We used to live next door to one of the famous Kennedy houses and one of my favorite moments, that made me smile upon each recurrence, was watching the tourists try to decipher exactly which house was that of Mr. and Mrs. Kennedy.

The houses below are right next door to one another, and have caused many tilted head looks of contemplation.  Which one do you think would be the Kennedy home? 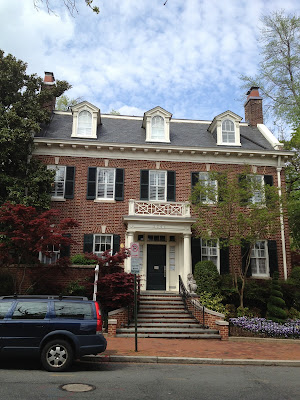 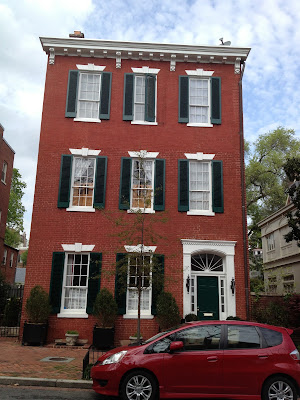 Despite popular belief, the Kennedy house is the classic Georgetown townhouse on the left...
Email ThisBlogThis!Share to TwitterShare to FacebookShare to Pinterest
CHECK OUT SIMILAR POSTS: When in Washington
Newer Post Older Post Home