What first attracted me to buying a pair of these very unique looking shoes was not necessarily the fashion of the shoe itself, but the "one for one" campaign behind it all. In 2006 on a trip to Argentina, a 30-year old by the name of Blake Mycoskie saw a need. Children were walking the streets barefoot, unknowingly putting their health and safety at risk. Some of these children were walking more in a single given day than you or I would in a week, and this was without shoes. Blake, without any sort of shoe making or cobbling in his background, had a blindsided vision to make the impossible possible. He was going to change things. He was going to give these children shoes.

The one for one campaign means that for every one pair of shoes that you buy, Toms will give one pair to a child in need. Not knowing whether or not this idea would conceptualize, Blake did what many successful entrepreneurs have done; he went for it. What started as a strong-hearted mission to fill the gap has now grown into a movement worldwide. Shoes are now given to children in over twenty various developing countries around the world. As of September 2010, Toms had given more than 1 million shoes to those in need. 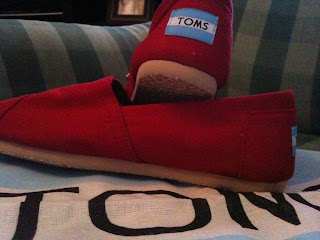 When Tom's first started, the basic canvas shoe was pretty much all the inventory entailed, but these days there are many different shoe options, including glitter, corduroy, wedges, boots, etc. Toms even sells clothing now, and have added eyewear to their one for one campaign. Their current goal is to help restore sight for over 100,000. So the next time you're looking for a new pair of shades, see if any of these might strike your fancy.

Toms seems to be popular with the little ones, too. I've seen many a toddler teetling around in Toms, sometimes even the same Toms that I may be sporting myself. So this makes me think that they probably fall into a category similar to Crocs, which is yet to be determined if they are here for the long run, or just a current trend, but for now, I'll love them. And the Toms campaign puts further justification into hopes for a longer term product.

Be forewarned that the pair you buy is the pair they give, so there are restrictions on production as to the long-term life of the shoe. They will not last forever, but remember that the children that receive the shoes generally outgrow them within a year or so, thus there is more of a quantity than quality aspect here. But, for the price, and the feeling that you were part of the one for one movement, I recommend investing in a pair or two. They will last long enough to get some good use, and sport this fashion trend. And when someone asks where you got such a nifty, or, depending who your audience is, such an odd looking pair of shoes, pass along the word...

Now, I am not trying to be pulling at the do-gooder in you here. We all give back in whatever ways we can, but I write about Toms because not only is the basis behind the purchase enough to justify the cash outlay, but these shoes are some of the most comfortable shoes I have laid foot in. Seriously. Especially on days when I know I will be walking the city, I head for the Toms.
Email ThisBlogThis!Share to TwitterShare to FacebookShare to Pinterest
CHECK OUT SIMILAR POSTS: Clothing and Accessories
Newer Post Older Post Home