Dating back to 1935, there is nothing more classic on the east coast than Sperry Top-Siders. The name Sperry comes from the original founder and creator of the shoe, Paul Sperry, and the second part of the name, well, that will be explained herein. While these shoes have gained popularity more recently as a fashion fixture, they actually were originally made, and to this day still, to serve a purpose. Allow me to explain a few reasons as to why a boat shoe is what it is. 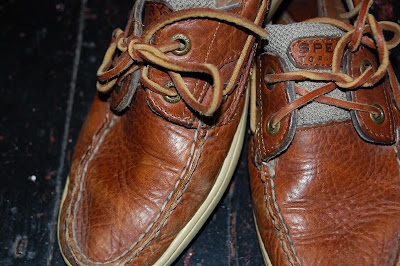 First of all, a boat shoe, which is also sometimes referred to as a deck shoe, is supposed to have a white or light bottom sole. The reason for this is in its name. The shoes were made for boaters that did not want to dirty or mark up the decks of their boats. So, they wanted non-marking soles as the "top siders" aboard their boats. Identification of a classic boat shoe number one.

Secondly, in conjunction with the lighter sole, the boaters were looking for practicality in their movement aboard their vessel, especially on sailboats where the captain and crew must move around a lot to raise and lower sails. So, not only is a traditional boat shoe created with a rubber sole for more traction, but also there are specifically designed slits cut into the bottom of the shoe for gripping the deck and helping the boater to sustain placement amongst the clashing tides. After all, when your hands are being used to man the sails, there isn't much else to keep from a man overboard.

Speaking of... occasionally, especially in racing, there may be a man overboard. Now, boat shoes are made with leather for the specific reason of repelling water as the waves crash against the side of a boat and splashes are inevitable. Over the years, as we humans have become more innovative, boat shoes are now also coated with a water repellent for added hopes of keeping the feet dry. But, in the case of water overflow, or back to our man overboard experience, the shoes are designed to have a drainage system. Whether it be a slight gap in between the lacing of the shoe and the sole, or the side ventilation on some of the newer models, boat shoes rid themselves of water faster than your typical shoe's soggy absorption.

Because of this water plunge, these shoes are not typically accompanied by a sock. And they are fit so well that you don't need one. If you were in a given situation where your shoe has become water logged, you can just take them off and let them dry in the sun. And once dry, they are just as good as before, if not better. Like the boaters that wear them, it's best to age into a "salty dog". These shoes are made to last.

Popular among both men and women, not only are the shoes comfortable and practical, but they last for years and years. Go ahead and get a pair, whether it be for boating, or fashion. It's always good to be on the ready in case you get an invitation to hop on board.
Email ThisBlogThis!Share to TwitterShare to FacebookShare to Pinterest
CHECK OUT SIMILAR POSTS: Clothing and Accessories
Newer Post Older Post Home