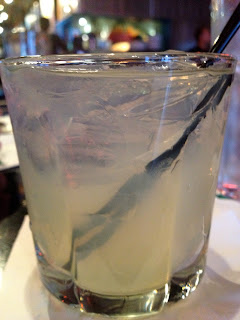 As summer is drawing to its always too soon yet inevitable ending, I invite you to imbibe in one last refreshing summer cocktail - DC's own Gin Rickey.

The Gin Rickey is the unofficial drink of the city of Washington. Befitting it is, as the drink is named for Colonel Rickey, a member of a group of political activists that used to hang out in hotel or restaurant lobbies, waiting to snag an ear of an imbibing Congressman, hence coining the term "lobbyist".

Politics aside, having a day job as a biochemist, Colonel Rickey was a firm believer that too much sugar was not natural for the body (and this was the late 1800s). Thus, to indulge in his merriment of multiple G&Ts guilt-free, he sought a sugar-free alternative.  Also, Rickey found that soda water, the sugar less replacement, cuts the acidity of the lime, as opposed to its sister mixer.

This refreshingly libation can be enjoyed time and time again.  Get it in while you can, and then see you next summer!

1. Pile high some ice in a highball or cocktail glass.
2. Squeeze in the juice of 1/2 a lime.
3. Pour in the Gin and top off with Soda.
4. Give it a nice stir, garnish with a lime wheel, if you so choose, and sip wisely.