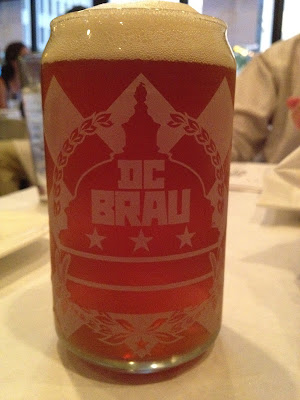 In April 2011 Washington, DC welcomed its first production brewery in over 60 years. DC Brau has gained popularity amongst its Washingtonians and tourists alike.  But, while the beers can be found in many of the local restaurants, liquor stores, and markets, they are grabbed up as soon as they hit the shelves, so when you see it, grab it. There's no time to think twice!

Since many of the beers come in the form of either can or keg, how befitting is this greatly creative glassware?!

Interesting beer factoid:  Apparently, brewers prefer the can because of two main enemies:  oxygen and UV rays. According to an insider, ideally DC Brau would package all of their beers in cans, but because they are a microbrewery without massive production, they have to put some of their seasonal selections in 22 oz. bottles for cost efficiency.

My favorites are their classics - The Public, The Citizen, and The Corruption. Have you tried DC Brau yet?
Email ThisBlogThis!Share to TwitterShare to FacebookShare to Pinterest
CHECK OUT SIMILAR POSTS: When in Washington
Newer Post Older Post Home