Stacking Stones, or Cairns, are no stranger to New England. If you have visited this part of the country, then you have seen the beautiful rock walls that landscape many of the houses. But where did they all come from?

At first ask, many New Englanders will respond that these rock walls were formed with the first settlers, who were farmers, needing a fence to keep the animals in (or out!). Smart thinking, at first. Now, does that really make sense? If you truly think about it, no.

But it's not totally wrong. The first settlers were indeed farmers, and the "new" England was covered in trees and debris. So, upon clearing the forestry land for their crops and livestock, there was plenty of fire wood to be stacked, but also these nuisances called rocks, which were tossed aside into a pile, or a "dump wall" as they called it.

Well, as the years went on, and the settlers started to take more pride in their new American land they called home, they wanted their home to look nice. Thus, these dump walls became beautiful works of masonry art for each farmhouse to display with honor. They truly are beautiful after all. 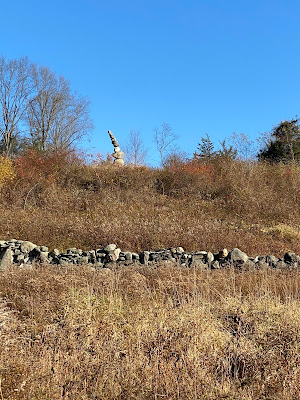 The stacking of stones is seen by many as an art form, or even a meditation - needing a lot of calmed focus and concentration. It is actually an ancient form of artistry seen back in Neolithic burial grounds in Scotland, nautical travel markers in Scandinavia, and Inca Goddess Pachamama shrines in Peru, according to the New Yorker.

One's reaction to a Cairn is individual, but for me, I enjoy the natural pause to stop and enjoy the beauty of the natural world around me and the thought, care, and effort of the Creator.